Peshāwar (help·info) ( Pashto: پېښور Pekhawar/Peshawar, Hindko: پِشور Pishor, Urdu: پشاور), is the capital of the Khyber-Pakhtunkhwa[2] and the administrative centre (but not the capital) for the Federally Administered Tribal Areas of Pakistan.[3] The Kushan king Kanishka, moved the capital from Pushkalavati (now called Charsadda in the Peshawar valley) to Purushapura in the 2nd century CE.[4] The current name "Peshawar" may derive from the Sanskrit Purushapura[5] (meaning "city of men") and is known as Pekhawar or Peshawar in Pashto and Pishor in Hindko. The area originally belonged to Gandhara and the eastern Iranian tribes of Scythian origin and later became part of the Kushan Empire. It gave its name to the Peshwari naan bread, one of the diverse types of naan common in the curry houses of Great Britain. Briefly it also witnessed some Greek influence after which it saw the Arab conquest and rise of Islam. Today it is one of the prime cities of Pakistan west of the river Indus. 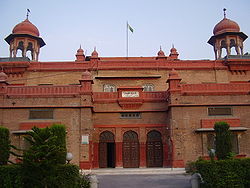 History of Peshawar Peshawar is now officially recognized as being one of the Oldest Living Cities in Asia. Its history and culture has continueduninterrupted since several centuries. This fact was confirmed by the discovery of silver punch-marked coins from the Government House in 1906–07 and the ongoing excavation at Gor Khatri which is the deepest and widest in the world.Being among the most ancient cities of the region between Central, South, and West Asia, Peshawar has for centuries been a centre of trade between Afghanistan, South Asia, Central Asia and the Middle East. As an ancient centre of learning, the 2nd century BCE. Bakhshali Manuscript used in the Bakhshali approximation was found nearby. Peshawar was a major centre of Buddhist learning until the 10th century. As an indication of its importance, Peshawar was also the site of Kanishka's Great Stupa which housed relics of Gautama Buddha, and was widely considered to be the tallest building in the world at the time of its construction. Ancient Chinese manuscripts tell of Buddhist pilgrims such as Faxian, Sung Yun, and Xuanzang reporting that the 7th century stupa, which was rediscovered in the south east of the city at a site called Shahji-ki-Dheri in 1907–08, had a height of 591–689 feet. Peshawar emerged as a centre of both Hindko and Pashtun intellectuals. Its dominant culture for much of British rule was that of the Hindko speakers, also referred to as "Khaarian" ('city dwellers' in Pashto). Its unique culture, distinct from the surrounding Pashtun areas, led to the city being romanticised by Pashto singers, with songs like larsha Pekhwar tha (go to Peshawar) and more recently Pekhawar kho pekhawar dhay kana (Peshawar is Peshawar after all). This unique culture has gradually disappeared with the massive influx of Afghan refugees and the increasing migration of Pashtuns into the city. The demographics has changed quite dramatically and Pashto is now the dominant language of the city. Peshawar is located in an area that was dominated by various tribes of Indo-Iranian origin. The region was affiliated with theancient kingdom of Gandhara and had links to the Harappan civilization of the Indus River Valley and to Bactria and other ancient kingdoms based in Afghanistan. According to the historian Tertius Chandler, Peshawar had a population of 120,000 in the year 100 BCE, making it the seventh most populous city in the world.

Vedic mythology refers to an ancient settlement called Pushkalavati in the area, after Pushkal, the son of King Bharata in the epic Ramayana., but this settlement's existence remains speculative and unverifiable. In recorded history, the earliest major city established in the general area of Peshawar was called Purushapura (Sanskrit for City of Men) and was founded by the Kushans, a Central Asian tribe of Tocharian origin, over 2,000 years ago. Prior to this period the region was affiliated with Gandhara, an ancient Indo-Iranian kingdom, and was annexed first by the Persian Achaemenid empire and then by the Hellenic empire of Alexander the Great. The city passed into the rule of Alexander's successor, Seleucus I Nicator who ceded it to Chandragupta Maurya, the founder of the Maurya Empire in 305 BCE. Buddhism was introduced into the region at this time and may have claimed the majority of Peshawar's inhabitants before the coming of Islam.

The area that Peshawar occupies was then seized by the Greco-Bactrian king, Eucratides (170 – 159 BCE), and wascontrolled by a series of Greco-Bactrian and later Indo-Greek kings who ruled an empire that spanned from present day Pakistan to North India. Later, the city came under the rule of several Parthian and Indo-Parthian kings, another group of Iranic invaders from Central Asia, the most famous of whom, Gondophares, ruled the city and its environs starting in circa 46 CE, and was briefly followed by two or three of his descendants before they were displaced by the first of the "Great Kushans", Kujula Kadphises, around the middle of the 1st century CE.

Peshawar formed the eastern capital of the empire of Gandhara under the Kushan king Kanishka, who reigned from at least 127 CE. Peshawar became a great centre of Buddhist learning. Kanishka built what may have been the tallest building in the world at the time, a giant stupa, to house the Buddha's relics, just outside the Ganj Gate of the old city of Peshawar. The Kanishka stupa was said to be an imposing structure as one travelled down from the mountains of Afghanistan onto the Gandharan plains. The earliest account of the famous building is by the Chinese Buddhist pilgrim monk, Faxian, who visited it in 400 and described it as being over 40 chang in height (probably about 120 m or 394 ft) and adorned "with all precious substances". "Of all the stûpas and temples seen by the travellers, none can compare with this for beauty of form and strength." It was destroyed by lightning and repaired several times. It was still in existence at the time of Xuanzang's visit in 634. From the ruined base of this giant stupa there existed a jewelled casket containing relics of the Buddha, and an inscription identifying Kanishka as the donor, and was excavated from a chamber under the very centre of the stupa's base, by a team under Dr. D.B. Spooner in 1909. The stupa was roughly cruciform in shape with a diameter of 286 feet (87 m) and heavily decorated around the sides with stucco scenes. Sometime in the 1st millennium BCE, the group that now dominates Peshawar began to arrive from the Suleiman Mountains of southern Afghanistan to the southwest, the Pashtuns. Over the centuries the Pashtuns would come to dominate the region and Peshawar has emerged as an important centre of Pashtun culture along with Kandahar and Kabul as well as Quetta in more recent times. Muslim Arab and Turkic arrived and annexed the region before the beginning of the 2nd millennium.

Notice For Auction Of Residential Plots Are Invited At Hayatabad

Notice Of Auction Are Invited For Cafiteria Canteen And Tak Away

Notice For Auction Of Hirise Building Are Invited At Hayatabad